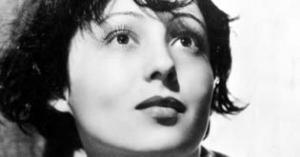 Luise Rainer, born January 12, 1912, in Düsseldorf, attended actor’s training at Hochschule für Bühnenkunst in Düsseldorf from 1927 to 1928 and subsequently made her stage debut in a production of Düsseldorf’s Schauspielhaus because of the drama school’s association with the theatre. In 1931, she went to Vienna’s Volkstheater. From 1932 on, Luise Rainer started to appear in film productions, for instance, in Kurt Gerron’s musical romantic comedy "Heut kommt’s drauf an" alongside Hans Albers. With her movie performances, Rainer attracted the attention of the US film studio mogul Louis B. Mayer, and in 1935, two years after the Nazi ascension to power, Mayer brought the German Jew Rainer to Hollywood, signed her to a three-year contract for his MGM studio and promoted her as the "next Greta Garbo".

Luise Rainer already made her breakthrough in Hollywood with her first US film, the romantic comedy "Escapade", directed by Robert Z. Leonard. Furthermore, Rainer won the award as "Best Actress" at the New York Film Critics Circle Awards and the coveted Academy Award as "Best Actress in a Leading Role" for her performance in her second US film, the musical "The Great Ziegfeld" (1936), again directed by Leonard. Only one year later, Rainer won another Academy Award for her expressive portrayal that was mainly based on her gestures and facial expressions alone of a Chinese farmer’s wife in Sidney Franklin’s social drama "The Good Earth" (1937). Thus, Rainer became the first actress to win Academy Awards in two consecutive years. Since then, she was only followed by Katherine Hepburn, who managed to repeat this feat 32 years later. Furthermore, Luise Rainer to date is still the only German actress who ever won an Academy Award as "Best Actress in a Leading Role".

But Rainer’s streak of success did not last for very long. She played the wife of the composer Johann Strauss in the musical "The Great Waltz" (USA, 1938), directed by Julien Duvivier, that turned out to be a box office hit but subsequently, Rainer’s movie career came to an abrupt halt. After her film "Dramatic School" flopped at the box office, she practically did not get any offers for movie roles anymore. There still exist several explanations why: Several sources say, Rainer became "difficult" to handle on the film set and started to demand higher pays. Others say her image was damaged by her marriage to the avowed Communist Clifford Odets. Many years later, Rainer herself blamed Louis B. Mayer for the end of her career: "He said, "we made you and we are going to destroy you’. Well, he tried his best", she told the London-based newspaper "Telegraph" in 2009.

After a five-year hiatus from the movie screen during which she performed at theatres in New York and in London, Rainer starred in her last film in the US in 1943 in Frank Tuttle’s war drama "Hostages". In 1944, she moved to London with her second husband Robert Knittel and withdrew from the movie business. From then on, she only appeared sporadically in theatre or in TV roles. Federico Fellini’s offer to play a guest role in "La Dolce Vita" (1960) did not materialize because of differences between Rainer and the director. In 1997, Luise Rainer made her last appearance in front of the camera: In Károly Makk’s film "Dunkle Tage in St. Petersburg" ("The Gambler", NL/HU/GB), a film version of Dostoyevsky’s novel, she played the supporting role of the grandmother.

For several years, Luise Rainer was the oldest living winner of an Academy Award. She died December 30, 2014 in London, aged 104.