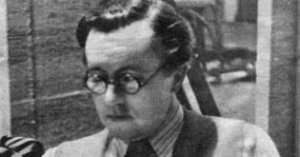 Hans H. Zerlett, born August 17, 1892, in Wiesbaden, did not finish school and "ran away" (Zerlett) from home to start a career as an actor. He performed at several provincial theatres but volunteered for military service in 1915. After his resignation from military service due to an illness during World War I, Zerlett became known as the artistic director of a tour program of the war play "Der Hias" although he had been busily working in the business. His repertoire list from 1916 already states 254 roles Zerlett had played.

In 1917, Zerlett became the director of Berlin's Friedrichstadt-Theater. From the beginning of the 1920s on, Zerlett also made a name as a playwright. Then, in 1927, Zerlett made his first steps in the movie business with his screen play to the comedy "Höhere Töchter". As the head dramatic advisor, Zerlett specialised on entertaining movies – with the exception of "Vererbte Triebe", a film that propagated the sterilization of "hereditary challenged" criminals.

In 1934, Zerlett made his debut as a film director with the Karl-Valentin/Liesl-Karlstadt short film "Im Schallplattenladen". In the same year, Zerlett also made his first feature film as a director with the comedy "Da stimmt was nicht" starring Adele Sandrock and Viktor de Kowa, which became the start to a successful career. In the eyes of his critics, Zerlett, who also wrote the screen plays to all of his films, was an experienced director of mainstream entertainment movies that reached out to a large audience. His most successful films include the medical drama "Arzt aus Leidenschaft", the revue film "Es leuchten die Sterne", and the comedy "Die selige Existenz". But Zerlett also made Nazi propaganda films such as the anti-Semitic music film "Robert und Bertram", and the drama "Venus vor Gericht" (1941) that agitates against the so-called "degenerate art" and against democratic values.

But from 1942 on, Zerlett, who in 1937 had become the head of production at Tobis Filmkunst, returned to making very successful entertainment films again. After the end of World War II, Zerlett was arrested by the Russian secret service and died of tuberculosis in 1949 while still being held in war captivity. In 1950, Zerlett was acquitted of having been a Nazi follower in a posthumous denazification process.