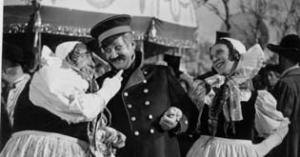 Drawing from the burlesque by Gustav Roeder, Hans H. Zerlett scripted his infamous anti-Semitic musical: After their successful jailbreak, vagabonds Robert and Bertram make the acquaintance of Lenchen, who is the daughter of the local innkeeper. Since her father is broke, he urges Lenchen to marry his creditor Biedermeier instead of her beloved Michel.

In order to prevent this, Robert and Bertram travel to town and – under false pretensions – sneak into the house of jewish financier Ipelmeyer, who has loaned Biedermeier a lot of money. That night a costume ball is held, during which the two tramps steal the family fortune, only to hand it over to Lenchen’s father. Lenchen and Michel are reunited, while Robert and Bertram escape with a captive balloon which takes them directly to heaven.