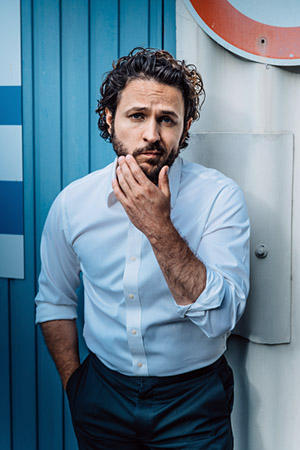 Dmitrij Alexandrowitsch Schaad was born on September 17th 1985 in Kaskelen, Kazakhstan SSR; in 1993 the family moved to Germany. After graduating from high school, Schaad studied acting at the Bavarian Theatre Academy 'August Everding' from 2005 to 2009, followed by the State Institute of Performing Arts in Saint Petersburg, Russia (2009). In 2006 and 2008 he received the acting scholarship of the German Stage Association.

In 2009 Schaad became an ensemble member of the Schauspiel Essen, but  went on to the Schauspielhaus Bochum with artistic director Anselm Weber the following year already. In 2011 he won the Bochum Theatre Prize for Young talent for his performance in the play "Amerika". In 2013 Schaad transferred to the Maxim Gorki Theater in Berlin, where he was a member of the ensemble until 2019. For his roles in the 2013/14 season, he was voted Young Actor of the Year by the trade journal "Theater heute". From 2013 Schaad also began working as a television actor, for example playing the assistant to the Chief Inspector in "Vielleicht" (2014), an episode of the popular "Tatort" series.

In addition to acting, Schaad is also an author. So far, he has had a monologue in almost every play at the Gorky Theatre, the text of which he wrote himself. He has also worked on screenplays by his brother Alex Schaad, such as the 30-minute psychodrama "Invention of Trust" (2015), which won several prizes among them the Student Academy Award for Best Foreign Language Film.

In January 2017, Schaad's first self-written stage play, "Die Konsistenz der Wirklichkeit", which was also his directorial debut, celebrated its premiere at his Alma Mater, the Bavarian Theatre Academy. At the Schauspielschultreffen 2017, the production won the Ensemble Prize of the Conference of the Performing Arts and Literary Writing of Switzerland, as well as the Prize of the Students. The Schaad brothers received the Katja Eichinger Screenplay Grant for the exposé of the feature film "Darktrip" in 2017.

"Endling", the Schaads' second medium-length film, won the audience award for the best medium-length film at the Max Ophüls Film Festival in January 2018. Almost at the same time Dimitrij Schaad's second stage play "Die unvorstellbaren Folgen einer eingebildeten Revolution" had its premiere; like his first work, he had worked on this play with 3rd year students of the Munich Theatre Academy. Schaad was seen on television in the "Polizeiruf 110" episode "Demokratie stirbt in Finsternis" (2018) as the leader of a radical anarchist group. He made small appearances in the series "Das Boot" (2019) and in an episode of the British series "Killing Eve" (2019). Schaad played his first leading role in Dani Levy's adaptation of the bestseller "Die Känguru-Chroniken", which was theatrically released in March 2020.

In addition to his work as an actor, writer and director, Dimitrij Schaad began teaching as a freelance lecturer at Berlin's Hochschule für Schauspielkunst 'Ernst Busch' in 2015. However, he gave up his permanent engagement at Berlin's Maxim Gorki Theater in 2019 to focus more on his work as a film actor and writer.

His play, co-written with Yael Ronen, "(R)Evolution. Eine Anleitung zum Überleben im 21. Jahrhundert" ((R)Evolution. An Instruction to Survive in the 21st Century) premiered at Hamburg's Thalia Theater in February 2020; it has since been translated into several languages and performed on numerous stages. The second play written with Yael Ronen, "Operation Mindfuck - Based on a true story but not really," premiered at the Maxim Gorki Theater in May 2022.

As an actor, Schaad took on smaller series roles, for example as the stepbrother of the main character Villanelle in the british hit series "Killing Eve" (2020), as an SS-Standartenführer in "Das Boot" (2020) and as the lover of the main character's mother Christiane in "Wir Kinder vom Bahnhof Zoo" ("We Children from Bahnhof Zoo", 2020). In 2022, he starred alongside Jella Haase as a police officer in the Netflix series "Kleo," about a former GDR contract killer on a vendetta.

Schaad played leading roles on the big screen in the turbulent party comedy "JGA: Jasmin. Gina. Anna." and in the award-winning science fiction love drama "Aus meiner Haut" ("Skin Deep", 2022), about two couples who embark on a momentous body-swapping experiment. The film was released in February 2023.