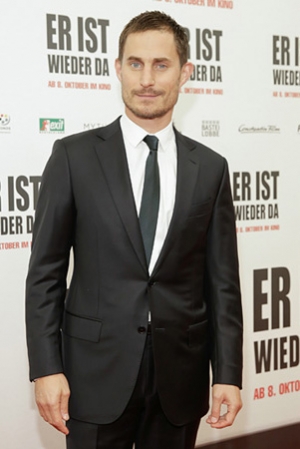 Clemens Schick at the premiere of "Er ist wieder da" in Berlin on October 6, 2015

Clemens Schick was born on February 15th 1972 in Tübingen. He started studying art in Ulm, and then stayed in a French monastery for a few months before enrolling at the "Berliner Schule für Schauspiel", where he took acting classes from 1993 to 1996. After graduation, he played at several renowned theatres in Germany, Austria and Switzerland. From 2001 to 2006, he was an ensemble member of the Schauspiel Hannover, and in 2007, he played "Death" in a staging of Hugo von Hofmannsthals "Jedermann" at the Salzburger Festspiele.

A guest role in the TV series "Balko" marked his screen debut in 1998. The following years, Schick appeared in TV and film productions alike, including supporting roles in "Enemy at the Gates" (2001) and the James Bond adventure "Casino Royale" (2006). Schick also played the lead in "Aufrecht stehen", which screened at the 2007 Berlinale, and was cast in Stefan Krohmer's TV drama "Mitte 30". Alongside Alexandra Neldel and Erhan Emre, he was one of the stars of the TV crime series "Unschuldig". In 2010, he played a young man searching for his disappeared dream woman in the melancholic comedy "Cindy liebt mich nicht".

Following his leading turn as a stressed-out truck driver who meets a young prostitute and ends up fleeing with her from her violent pimps in Philipp Leinemann's "Transit" (2010), Schick appeared in a string of made-for-TV films, including in Lars Becker's "Reise in den Tod" (2012), Florian Baxmeyer's "Die Jagd nach dem Bernsteinzimmer" (2012) and Dror Zahavi's "Das Jerusalem-Syndrom" (2013).

After supporting roles in "Du hast es versprochen" ("Forgotten", 2012), "Das Kind" (DE/US 2012), "Ein Haus in Berlin" ("A House in Berlin", DE/GB 2014) and the acclaimed mountain western "Das finstere Tal" ("The Dark Valley", AT/DE 2014), Schick had leading parts in the romantic drama "Praia do Futuro" (BR/DE 2012-2014) and the action film "Point Break" (US/DE 2015). Following his turns as an unconventional psychiatrist in the coming-of-age drama "Vier Könige" ("Four Kings", 2015) and as a software engineer who falls in love with a young artist (played by Nicolette Krebitz) in the TV romance "Treffen sich zwei" (2016), Clemens Schick starred in the dystopic science-fiction film "Stille Reserven" (AT/DE/CH 2016). Set in Vienna in the near future, the award-winning film sees Schick playing a salesman working for an all-controlling insurance company who starts to question the system when he falls in love with an underground activist.