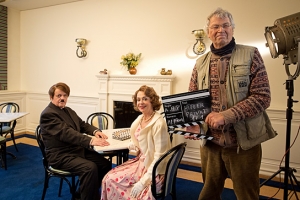 Amateur filmmaker Hans A. Pospiech lives in a small town in Bavaria and supports himself by selling his deceased father's war memorabilia . When it comes to film expertise, his biggest rival is Nagy, the director of the local amateur film club. Nagy is constantly bragging about his personal relationship to numerous stars, albeit leaving out the fact that he merely met them in his function as a Bratwurst vendor on the Bavaria studio lot. When local bank director Faltermeier tries to polish the balance of his branch by dabbling in state-subsided cultural funding and initiates a film competition, Pospiech sees his chance: By producing a genuine hit, he wants to defeat Nagy once and for all.