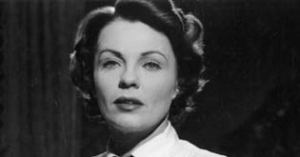 Hildegard Kolačný, born August 10, 1917, in Brod at the Save in Croatia, grew up in Vienna and at first studied music after finishing school. She then changed to drama school and subsequently became a cast member of Theater in der Josefstadt from 1936 to 1966. From 1938 to 1944, she played at Berlin"s Deutsches Theater under Heinz Hilpert.

Simultaneously to her stage debut, she also made her movie debut in 1936 in "Die Puppenfee" ("The Fairy Dolly"). She then became known to a larger audience (and to director Willi Forst) as school girl Gertrude in "Mädchenpensionat". Forst then gave her a more significant role in "Serenade". In her following films, Krahl played most different female characters ranging from simple girls to successful and fastidious society ladies. Her part in Gustav Ucicky"s Pushkin adaptation "Der Postmeister" ("The Stationmaster") in 1940 finally made her a star.


In 1942/43, Krahl played the title role in Helmut Käutner"s "Anuschka". In "Träumerei", she was Clara Schumann, a strong woman fighting with all her heart against the geistige Umnachtung of her husband, the composer Robert Schumann. In 1944, Krahl married the director and Ufa head of production, Professor Wolfgang Liebeneiner with whom she had previously done two films: "Das andere Ich" and "Grosstadtmelodie" ("Melody of a Great City").

After the war, Krahl was a cast member of several theatres, in Hamburg, Zürich, Frankfurt/Main, and Munich, among others, and made memorable performances in a great number of most different roles. In her films, Hilde Krahl was also cast in parts rather contrary in character: she played the companion of a physically and emotionally torn soldier returning from war captivity in "Liebe 47" ("Love 47), the courageous writer Bertha von Suttner in "Herz der Welt" ("The Alfred Nobel Story"), as well as Lady Churchill, a scheming and quick-witted court lady in "Das Glas Wasser" ("A Glass of Water").

From 1954 on, Krahl also worked for TV productions, mainly film adatations, but also appeared in successful TV series such as "Hallo – Hotel Sacher … Portier!", or "Derrick". After pausing film work for several years, Krahl returned to the screen and appeared in several TV series during the 1990s.