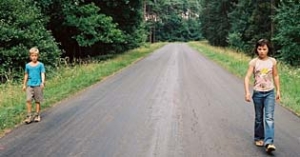 Sylvia, picks up her step-children Lea and Constantine on their way home from school. She drives with them to nearby Poland to go shopping – as she will claim later. As so often, mounting tension and quarreling ensue in the car. Sylvia suddenly stops the car in the middle of a country road, angrily ordering the children to get out. Furious, she continues driving, returning only some time later to the spot where she left the children behind. But Lea and Constantine seem to have disappeared into thin air.

After a brief search, Sylvia, following a sudden inclination, returns home. When she sees Joseph, the children’s father, however, she mentions nothing of their disappearance. In the darkness of their cold marriage, Sylvia finds no words to speak of what she has done. She is afraid of losing Joseph’s love if she tells him the truth. The following days are marked by a sort of speechlessness, although Joseph is in anguish about his children and begins to search for them.

Meanwhile in Poland, Lea and Constantine meet a man by the name of Cuba who promises to help them. But Cuba soon proves himself to be very unreliable. Only after he sees the reward being offered for the children on TV is he determined to do everything to bring them home. He gets in touch with the father who immediately sets out with Sylvia for Poland. In the meantime, given the recent rash of adverse circumstances, the children have long lost their trust in everyone...