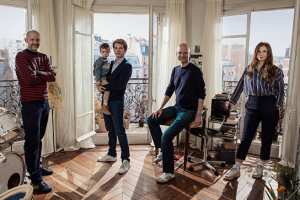 You Will Not Have My Hate

Paris, November 13, 2015: In the nightlife districts of the 10th and 11th arrondissements, in front of the Stade de France and at the Bataclan music club, Islamist terrorists carry out a series of brutal terrorist attacks that are among the worst in France's post-war history. A total of 130 people lose their lives. Among the 89 victims at the Bataclan is Hélène Leiris, mother of a 17-month-old son. While all of France is trying to comprehend the terrible events, Hélène's husband Antoine, a journalist by profession, posts an open letter on Facebook, addressed to the perpetrators. In it, he writes, among other things: "Friday night you stole the life of an extraordinary being, the love of my life, the mother of my son. But you will not get my hatred...". Antoine's moving message goes around the world. The daily newspaper Le Monde prints the letter on its front page, Antoine is interviewed by television channels such as BBC and CNN. But while Antoine becomes a symbol of an unbroken, open and loving society, inside he is struggling with the very hatred he wanted to defy.