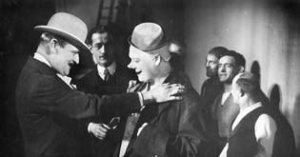 Botto, a famous circus clown, is afraid of women since a beautiful girl he was in love with once made fun of him because of his profession. André, a young performer, is the complete opposite. He loves girls and has a girl friend called Hanna, who works at the circus, too. Then Botto meets Blanche, a middle-class girl. Blanche mistakes Hanna for Botto’s girl friend and breaks down. Botto finds her lying on the street and carries her home. Soon, Botto becomes a frequent guest at Blanche’s family’s house but pretends to be an engineer.

Several months later, Blanche goes to a show of the circus. She meets André who begins to court her. During the interval, Hanna and Blanche begin a fight over André. Then Blanche also starts a fight with Botto and leaves him. She is going to see André to work with him in a looping performance in a different city. But catastrophe strikes, and André falls from the trapeze. Botto, who found a job at the same circus, is able to save Blanche in his clown’s disguise. Overwhelmed, she confesses to him that she is in love with him no matter if he is an engineer or a clown.