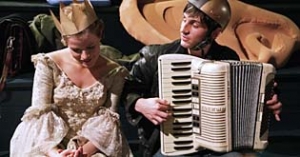 Finnish Tango
Alexander is a small-time crook, who unsuccessfully tours the minor arts stages with his buddies in an attempt to convince the world of the importance of "Finnish tango" that he is rattling out on his accordion. Then, the raid of a rival heavy metal band′s instruments leads to an accident with serious consequences and Alexander has to hide in the demimonde of occasional jobs. In a classified ad, a theatre group is looking for actors. The only qualification: at least a slight handicap.

Effortlessly, Alexander takes on his new role as an impostor, lands a role and finds accomodation in an assisted living community for handicapped people. There, he meets unsuspecting and likeable people – and a miracle happens. Every thoughtless disgrace Alexander commits, turns into something positive. Even when he flogs the new wheelchair, spurs on the manic-depressive cripple to commit suicide, or tries to turn the ignorance of a mongoloid into money – every time things turn to good account. Finally, Alexander starts to understand himself in this fairy tale of all the good within the bad, and is able to change.