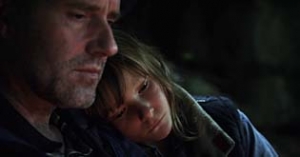 One Minute of Darkness

In the summer of 2006, film directors Dominik Graf, Christian Petzold and Christoph Hochhäusler began corresponding with each other on the subjects of film aesthetics, the Berlin School, Germany and the film genre (their correspondence was published in German film magazine "Revolver"). Two years later they decided to continue this theoretical discussion with a joint film project: three individual stories revolving around the same "fait divers": the escape of a convicted criminal from police custody. Graf’s "Komm mir nicht nach" tells the story of a police psychologist who meets old acquaintances while investigating a case. In Petzold’s "Etwas Besseres als den Tod" a young man doing alternative national service experiences a love story without a future. And in Christoph Hochhäusler’s "Eine Minute Dunkel" an indefatigable policeman hunting the escaped prisoner begins to doubt false certainties. Three films, three styles, three exciting approaches, variations, analyses. German television stations made this all possible. As Dominik Graf wrote: "… this work vis-à-vis mainstream TV, at its edges, in contradiction to and yet, whether voluntarily or involuntarily, in commentary on that mainstream – I find and have always found this to be extremely creative."