DON - The King is back 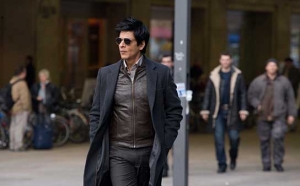 The film opens with a pronouncement: Don must die. This is the verdict of a European gangster cartel that fears its competitor’s plans to saturate the market with cheaper narcotics from Asia. Affable master-criminal Don bursts spectacularly onto the scene in Thailand where he is obliged to eliminate a small army of killers bristling with weapons. The eponymous hero of Bollywood blockbuster "Don" (which screened in the Berlinale’s Forum section in 2007) girds his loins for a counterattack involving Euro note printing plates. Berlin is the location for the big showdown from which Don – after a series of sensational stunts, captivating dance sequences and surprising twists – emerges victorious as the true king of Europe’s criminal underworld.

India’s superstar Shah Rukh Khan plays this über-gangster with a great deal of charm and tongue-in-cheek humour. This action hero’s lifestyle is a fast-paced game which, like every Bond movie, doubles as a showcase of fashion and luxury. Only this time the wind is blowing from Asia and, as it swirls all over its main Berlin location, it brings everything well and truly into disarray.