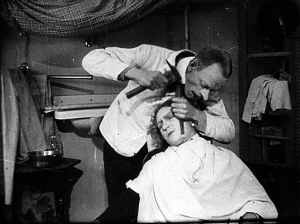 The Mysteries of a Hairdresser′s Shop

"The Mysteries of a Hairdresser′s Shop" is one of the celebrated films arising from the comedy team of Karl Valentin and Liesl Karlstadt. It describes the absurd goings-on of a by no means ordinary hair salon, where men with great beards wait in vain for a shave, while the journeyman barber takes a nap.

One customer, wanting a pimple removed from his chin, is treated with hammer, chisel and plane. The head of a distinguished professor is shaven bald like a China man. Panic stricken, he grabs for his protective hat, getting into a fight with a café guest. The quarrel ends in a sword fight , but while sharpening their weapons, the barber inadvertently cuts off the professor′s head. So that the sword fight may go on, the man′s head is stuck back on. The professor is eventually victorious, but only thanks to the energetic support of the barber, who robs his opponent′s head with a fishing hook.