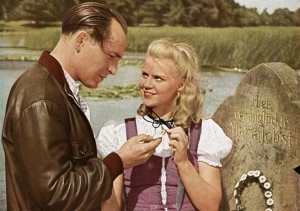 Veit Harlan′s melodrama – which is clearly informed by Nazi ideology and its notion of an indivisible bond between blood and territory – is a cautionary tale of a peasant girl who is punished for leaving her homestead and succumbing to the lure of a sinful Slavic city: Anna, whose mother drowned herself in the swamp, lives with her father on a farm near the river Vltava. She is to marry the farmhand Thomas, but dreams about the "golden" city of Prague, the home of her deceased mother. Eventually she travels to Prague, where she is promptly seduced by her cousin Toni. Anna gets pregnant, but Toni is only interested in her inheritance and dumps Anna after her enraged father dispossesses her. Desperate and heartbroken, Anna wants to return home but is refused entrance by her father, who has found a new wife. Ultimately Anna relives her mother′s fate and commits suicide in the swamp.