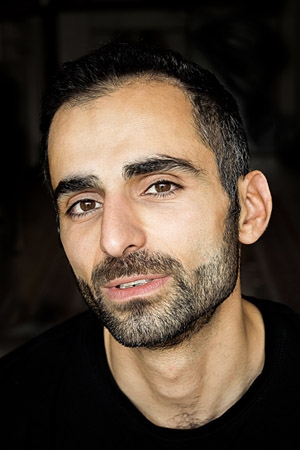 Hadi Khanjanpour was born in Teheran, Iran, in 1982. He has been living in Germany since the age of five, when his family fled the Iran-Iraq war. He grew up near Frankfurt, in Offenbach on Main. After graduating from school and a year of civil service, he started studying computer science in sport. In 2008, he participated in a casting at the layman’s club at Schauspiel Frankfurt and joined the group as well as the theater group theaterperipherie to appear in a number of plays. A year later, he won a few New Talent Awards for his lead role in the production of "Ehrensache" by Lutz Hübner (theaterperipherie, directed by Alexander Brill).

From 2009 to 2013 Khanjanpour studied acting at the Academy of Performing Arts in Ludwigsburg and completed an acting course at the Film Academy Baden-Württemberg in Ludwigsburg (2011/2012). In parallel, he appeared on stage in theaters in Basel (Switzerland) and Leipzig and performed a self-written project, the monologue "Die Stunde der Wahrheit", in several theaters, schools and at the Theatertreffen in Duisburg in 2013. At the Iranian theater festival in Heidelberg the project had won the audience award already in 2011.

In 2011, Hadi Khanjanpour started acting in films, first in a number of student short and graduation films then starring in a small role in the German-Turkish action thriller "Labyrinth" (2012). On TV, Khanjanpour made his debut playing a taxi driver in "Ein starkes Team – Die Frau im roten Kleid" (2013). He directed the pilot episode of the series "Dr. Illegal" (2015) and received a nomination for the First Step Award for his work.

In 2016, he appeared in a supporting role in an episode of the "Tatort" series, "Böser Boden", a year later he played a book keeper in the series "Bad Banks". His first lead role on the big screen was in the relationship drama "Die defekte Katze" ("A Dysfunctional Cat", 2018). The film was directed by Susan Gordanshekan, in whose short film "In Limbo" Khanjanpour had appeared in 2015. In parallel, he has been continously appearing on stage, mainly working with the theater groups Landungsbrücken and theaterperipherie.

He appeared at Theaterperipherie from 2015 to 2018 in "Ich rufe meine Brüder" and from 2016 to 2019 at Landungsbrücken in "La Haine". In 2018, he appeared at the Bühne für Menschenrechte Heimathafen Neukölln, Berlin, in "Asyl-Dialoge."

In Kai Wessel's multi-part "Die verlorene Tochter" (2019), he had a supporting role as the chief inspector; in the award-winning feature film production "Zoros Solo" (2019), a refugee and coming-of-age story, he played the father of the teenage title character.

Khanjanpour has also appeared several times in international productions: He was part of the ensemble cast of the British horror film "The Lair" (2022) and appeared in an episode of the Israeli-American streaming series "Tehran" (2022). Also in 2022, he was in front of the camera for Guy Ritchie's film "The Interpreter" (release: 2023).

Khanjanpour had a leading role in the multiple award-winning drama "Stille Post" ("Whispers of War"), which was released in late 2022. In it, he played a Berlin elementary school teacher who is confronted with the reality of war in his native Kurdish town through amateur footage.

Since the winter semester 2020/21, Hadi Khanjanpour has been a drama lecturer at the Mozarteum Salzburg. In addition, he is a jury member of the film funding 'HessenFilm' in the area of "young talent" since 2022.