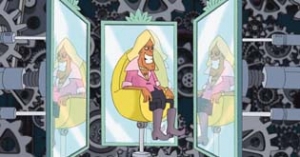 “Harry, get the car” has to be one of the most famous sentences never spoken on German television! In over 280 episodes, over twenty-five years, Chief Inspector Derrick (Horst Tappert) and his typical second-fiddle-playing partner Harry Klein (Fritz Wepper) brought the bad guys to book.

They also regularly brought public broadcaster ZDF up to nine million viewers each week and, with fan clubs at home and abroad, the series has also been sold to 102 countries.
But while the real life Derrick bowed out in October, it’s time for the animated satire Derrick to make his entrance: someone is killing the stars of the Eurovision Song Contest and they have got to be stopped.
“The idea came from Ralph Christians,” says director Michael Schaack. “He convinced ZDF and now we’re taking the familiar elements of the series and exaggerating them: Derrick’s a lot stiffer, his toupee’s more prominent, that sort of thing. It’s good if you know the series but not necessary.”
For TFC Trickompany, says Schaack, “parodying a TV-series is something completely new. There are a great many brands lying around and this could be a big opportunity for us.”
The company is perhaps best known for its series of Werner films, about the beer-swilling, babe-bothering, biker-plumber of the same name, and Das kleine Arschloch (The Little Jerk), based on Walter Moers’ notorious comic-book child-from-hell.
But look at TFC’s website and you’ll see a very broad range of production styles and subjects. This is because the company operates as a studio for hire, making films, says Schaack, “for pocket money by many standards, but the audience wants jokes and we can make them cheaper! We aim for the national market and can make it work. When the film works here, we can sell it abroad. And since we have more freedom, as opposed to making international co-productions where everyone has to have their say, we have more fun.”
Derrick is traditional 2D animation. While Hollywood has now gone over to computer, or 3D, blaming its recent failures on the traditional process, Schaack insists, “It all comes down to the material, the story and jokes. Pixar’s films would work just as well in 2D. The audience isn’t so bothered by the look of the film as by the content. Animation has to be fun.”
Derrick - The Feature Film promises to deliver fun in spades.