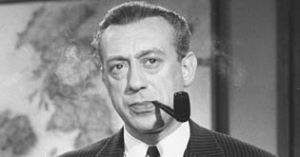 Horst Tappert, born May 26, 1923, in Elberfeld, finished secondary school and a commercial education before he was drafted by the military. After the end of the war, Tappert became an accountant at the theatre in Stendal where he discovered his acting talent. He then took actor"s training at Paul Rose"s, made his first stage performances and worked at Kassel"s Staatstheater and Munich"s Kammerspiele until the end of the 1960s.

In 1958, Tappert played his first movie part as a teacher in Kurt Hoffmann"s satire "Wir Wunderkinder" (Aren"t We Wonderful?) about the 1950s society. He then played several supporting parts in major productions like "Die Trapp Familie in Amerika" und "Er kann"s nicht lassen" as well as larger roles in various TV productions. In 1966, Tappert played his by then most successful part as Michael Donegan in the three-part semi-documentary crime movie "Die Gentlemen bitten zur Kasse" (The Great Train Robbery). The successful Jerry Cotton-adaptation "Die Rechnung - eiskalt serviert" also saw Tappert as an unscrupulous villain – rather in opposition to his later role image.


With the role of Scotland Yard inspector Perkins in the Edgar Wallace-adaptations "Der Gorilla von Soho" (Gorilla Gang , 1968) and "Der Mann mit dem Glasauge" (The Man with the Glass Eye, 1969) Tappert changed his role image and changed for the type of role that would constitute his dateless role type: the austere, sharp-witted and adamant but still human detective. So, when the ZDF needed a successor for its crime series "Der Kommissar" at the beginning of the 1970s, Horst Tappert became the leading actor of ZDF"s new series.

"Derrick" soon became a sensational success-story. Between 1974 and 1998, Tappert played in 268 episodes of the internationally established crime series. In 1988 Tappert was awarded with the Bundesverdienstkreuz which was followed by the Verdienstorden der Bundesrepublik Deutschland in 1997. After leaving his formative role of "Derrick" in 1998, Horst Tappert completely withdrew from the film business.