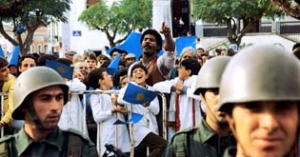 The bandoneon player Daniel and the boxer Toni arrive independently from each other in a provincial town in Latin America where they are booked to perform at a folk festival. Both of them are completely apolitical but are forced by external circumstances to take a political position. Toni falls in love with the daughter of an influential attorney but has to keep his love a secret. Meanwhile, Daniel learns about the atrocities committed by the Junta from the town’s residents. In his outrage, he gets himself into an argument with a plain clothes policeman. Toni comes to the rescue and injures his hand in the altercation. Thus, he naturally will be in an inferior position to his later adversary in the box ring, a Junta officer. Still, he is profoundly convinced that the fight will comply with the rules of fair play.