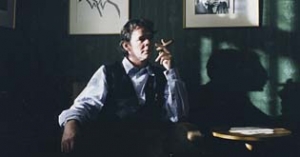 Brecht′s 100th birthday is being celebrated on 10 February, 1998. A good enough opportunity to examine his life closely again. The film director Jutta Brueckner is mainly concerned here with the question of the kind of person Brecht was. We have known him until now as the brilliant author and theatre director, through his plays themselves; we also know him as the cultural flagship of the GDR along with his world-famous Berliner
Ensemble. But there was so much more that made his life interesting. The film director Jutta Brueckner tries in this film to find answers to many questions. Questions which, particularly in the GDR, were never allowed to be posed. In order to track down previously undiscovered things, she sends the actor and theatre author Peter Buchholz on a fascinating journey - to the focal points of Brecht′s life.