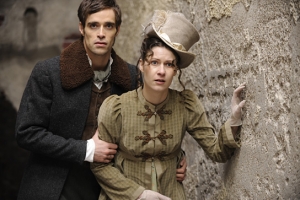 It is spring 1809. Katharina′s Tyrolean husband, Franz, is arguing with a French soldier in Augsburg′s marketplace. It ends with the soldier dead by accident and the young couple fleeing the city for Franz′s homeland. Even on the way it′s obvious that the mood in the Alpine land is at a breaking point. Bavaria and France, which have occupied Tyrol for years, are despised, which doesn′t guarantee the Bavarian Katharina the warmest of welcomes. She soon misses the warmth and comfort of her family in Augsburg.

After so many years away from home, Franz is quickly caught up in the enthusiasm of the independence movement around Andreas Hofer. He calls the Tyrolean farmers to rise up. Before long, Franz marches with his younger brother off to war, leaving Katharina at home. Reliant for the first time only on herself, Katharina undergoes hard times until, finally, she masters the tasks at hand and wins the villagers′ respect.
Against all the odds, the Tyroleans return victorious from their battles. The villagers celebrate. Only Katharina and the village priest recognize that although the night belongs to them, a lasting victory is impossible. Forced to make a decision, Katharina decides to render Franz unfit for battle. But he discovers her plan, their relationship shatters and Katharina is expelled from the farm.