The Tri-Ergon Department at Ufa

The Tri-Ergon Department at Ufa

As Ufa's "music adviser", Guido Bagier was asked in 1923 to evaluate the prospects of success for sound movies. Ufa's management wanted him to write a report on the sound-on-film technology developed by the three German technicians operating under the name Tri-Ergon (the work of three) - Joseph Engl, Joseph Masolle and Hans Vogt. One year later, on September 17, 1922, the Tri-Ergon technicians presented a number of short films in the Alhambra-Saal in Berlin, demonstrating their technology for the first time to the public. The sound was produced by a sound track that was integrated into the film strip and read by a ray of light. 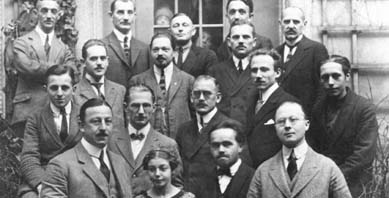 The inventors and their staff in September 1922: Jospeh Massolle, Hans Vogt, Jo Engl (front row, from left to right)

Although Bagier wrote a positive report, it was not until 1925 that Ufa signed a contract with the Zurich-based Tri-Ergon AG, which now held patent rights. This gave the go-ahead for Ufa's sound movie experiment, and the new Tri-Ergon department was set to begin work under Bagier in summer 1925. But then Bagier had difficulty finding adequate quarters for his sound film department amidst studios that were equipped for silent film production only. "We weren't able to find a suitable location in Babelsberg for sound recording", Guido Bagier noted in a diary entry on July 20. "So we'll have to look for a quiet place somewhere else - a place not disturbed by the shouts of the unit manager, the hammering and pounding of stagehands, the piercing whistle of the gaffer, the buzzing of spotlights, and the hissing of machines and tractors." Bagier finally found quarters in Weißensee on July 28, 1925, and the Tri-Ergon department started its actual work producing the film "Das Mädchen mit den Schwefelhölzern" (The Little Match Girl). However, due to technical problems, the screening of the film on December 20, 1925 was a failure. This fiasco (as Guido Bagier called it) led to the unexpected, premature closing of the Tri-Ergon department. Ufa immediately terminated its contract with Tri-Ergon AG and discontinued its experiment with sound movies for the time being.