"Me Boss, You Sneakers": On the Culture Clash and the Representation of Germans

If one looks at the immigrant films of the 1970s and 1980s that dealt with guest workers and their desperate attempts to orient themselves in an alien and mostly alienating culture, the question automatically arises as to how Germany and the Germans were being represented, especially as most of the films on this issue were made by German directors, including Jan Schütte ("Drachenfutter" ["Dragon Chow"]) and Helma Sanders-Brahms ("Shirins Hochzeit"). From today's perspective, the characterization of the German figures unavoidably comes across as rather clichéed. The German (or Swiss or Austrian) characters are typically represented as intransigent authoritarians ("Jannan - Die Abschiebung," "Das kalte Paradies"), exploitative schemers ("In der Fremde," "Drachenfutter," "Reise der Hoffnung") or as uncomprehending or indifferent passers-by, co-workers, or neighbors ("Palermo oder Wolfsburg"). The essence of these films often consists in the (thoroughly suspect) recognition that the cultures coming into contact with each other are irreconcilable, and that this fact has less to do with any intention on the part of the immigrants than with the disinterest of the locals. In this way, the German film makers, all of whom were on the left of the political spectrum, frequently used their films about immigrant lives; to launch a harsh critique of existing social-political conditions. Other directors, on the other hand, ironically portrayed the ignorance of affluent Central Europeans in comedies like "Die Schweizermacher" ("The Swissmakers", Switzerland, 1978), "Ilona und Kurti" ("German Guy Sexy!", Austria, 1991), or "Ich Chef, Du Turnschuh" ("Me Boss, You Sneakers!", Germany, 1998) - this last showing a shrewd asylum seeker who takes advantage of the Germans' typical reverence for authority in order to fake his residency status. 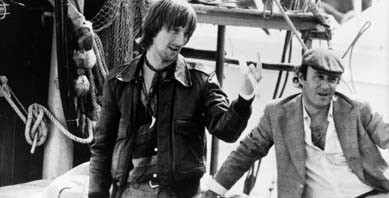 Source: DIF
Marius Müller-Westernhagen and Guido Gagliardi (from left) in "Theo gegen den Rest der Welt" (Theo Against the Rest of the World, 1980)

The films in which Germans and non-Germans achieve anything like mutual understanding, however, can be counted on one hand. Hark Bohm's intercultural love story "Yasemin" (1988) abounds with German do-gooders who are at pains to demonstrate their respect and tolerance for traditional Turkish values. In "Anam" ("My Mother", 2001), a German cleaning lady helps her Turkish co-worker find her son. It is characteristic of these films that understanding and friendship between Germans and Turks are only possible when the individual parties are members of lower social classes. In Fassbinder's "Angst essen Seele auf" ("Ali: Fear Eats the Soul", 1974), an older cleaning lady falls in love with a young Moroccan. "Wenn der Richtige kommt" ("When the Right One Comes Along", 2003) also has a cleaning lady, an unquestionable outsider, falling in love with a Turkish man. In Tevfik Baser's "Abschied vom falschen Paradies" ("Farewell to False Paradies", 1989), a Turkish woman, in prison following the killing of her tyrannical husband, befriends the German inmates. In films like "Theo gegen den Rest der Welt" ("Theo Against the Rest of the World", 1980) or "Voll Normaaal," the close friendship between a "white trash" German protagonist and a foreigner throws the outsider status of the German into sharp relief. Similarly, in a genre film like Lars Becker's "Schattenboxer" (1992), the crew of socially marginal tough guys only becomes truly whole when the non-German joins them. What is likeable about all of these films is that the origin of the foreign friend is not at all a problem: "The cultural and racial differences [have been] subordinated to a masculine [...] canon of behavior. [...] What is important is that the men can rely on each other and that they have mastered a common symbolic language."