Even today certain Third Reich films cannot be shown publicly without special permission. Due to militaristic, racist, anti-Semitic, or nationalist content, their release is prevented by the film industry's institution of voluntary self-control [Freiwillige Selbstkontrolle or FSK]. The indicated films may only be shown "conditionally" in private screenings, accompanied by an historically competent introduction. The criteria determining which Nazi-period films would be "conditionally banned" were established directly after the war's end by the allied powers in the three western occupation zones. The allies had decided in June 1945 that all pre-1945 German films should be subjected to a thorough examination before their re-circulation would be permitted. On September 28, 1945, film officers representing the British, French, and Soviet military governments met to decide which films were to be prohibited from public exhibition in Germany. 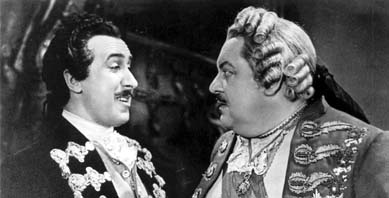 The criteria they came up with was adopted, with minor changes, by the Allied Information Committee as the "Principles for Inter-Allied Censorship of German Films". Accordingly, the following types of films were to be prohibited:

How these principles were to be interpreted was left up to the military governments for the respective zones. A 1952 list includes 221 films that met these criteria. The film industry's body for voluntary self-control, which with the founding of the Federal Republic continued the agenda of the Allies' film censorship, adopted these principles as the basis for determining conclusively which National-Socialist period films were to be censored.