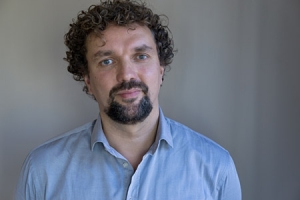 Thorsten Trimpop was born in Lüdenscheid on May 4 1973. He began to study philosophy and social sciences before enrolling in the acting class at the Akademie für darstellende Kunst in Ulm. From 2000 until 2007, he studied film direction at the Hochschule für Film und Fernsehen 'Konrad Wolf' in Potsdam-Babelsberg (today: Filmuniversität Babelsberg). During that time, he made several shorts and also directed the play "Mutter und Sohn" (2003) at the Maxim-Gorki-Theater in Berlin.

Trimpop's first feature-length documentary "Der irrationale Rest" ("The irrational Rest") depicted the reunion of two former friends and victims of the East-German secret police Stasi and premiered in the Forum section of the 2055 Berlin IFF. It went on to win the Don Quixote Award of the Fédération Internationale des Cinés-Clubs and screened at several more festivals before being released in late 2005. In 2008/2009, Trimpop was one of many filmmakers contributing to the documentary project "24 h Berlin - Ein Tag im Leben", that was named Best Documentary at the 2010 Bavarian Television Awards.

He started to teach film studies and film production at Boston University and the Massachusetts Institute of Technology (MIT) in 2012. Between 2014 and 2016, he also was a stipendiary at the MIT Open Documentary Lab. Already in 2012, Trimpop began to work on his sophomore feature "Furusato - Wunde Heimat". The long-term documentary about life in the radioactively contaminated areas of Fukushima in Japan premiered at the 2016 DOK Leipzig Festival, where it won the award for Best Documentary in the German competition.

In addition to his work as a filmmaker, Trimpop lectures at the School of the Art Institute in Chicago.