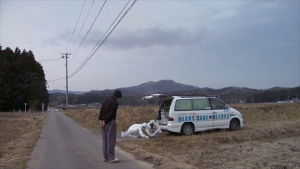 In Japan, the notion of homeland has a special meaning: The common belief is that men keep the landscape in which they were born inside of them for the rest of their lives. Yet what happens if this home is first devastated by a Tsunami and subsequently contaminated by radiation?

Of course, one is talking about Fukushima. Thorsten Trimpop's documentary shows how the natural disaster and nuclear meltdown of 2011 have dominated the locals' lives ever since. After about 14.000 people in a 20 km radius of the reactors were evacuated, the area turned into a ghost town. Now, the districts Kashima und Haramachi have been declared safe by the authorities, despite their radiation levels often being just as high as those in the forbidden zone. Trimpop explores why people remain in the contaminated regions. The portraits of individual inhabitants reveal that not everyone stayed out of free will, and the film conveys their inner turmoil as they are torn between the feeling of powerlessness and the love for their home.