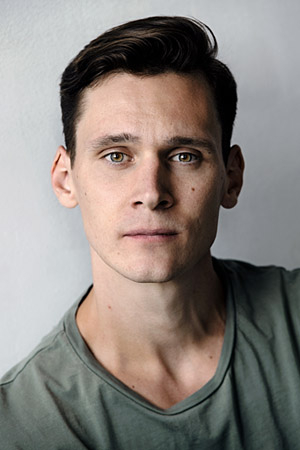 Rick Okon, born on 13 April 1989 in Schwedt an der Oder, began acting training in 2005 while still a schoolboy at the New Talent acting school for children and young people in Hamburg, which he completed in 2010. During this time he already made his acting debut with a small supporting role in an episode of the crime series "Großstadtrevier" (2007). Further appearances followed in TV productions such as the "Tatort" episode "Und Tschüss" (2007) as well as the crime series "Einsatz in Hamburg" (2008) and "Unter anderen Umständen" (2009). In 2010, Okon played his first cinema role in the music film "Rock It!". At the end of the same year, he began studying acting at the Konrad Wolf University of Television and Film in Potsdam-Babelsberg. He got his first leading role in the humorous love story "Romeos", which was released in German cinemas at the end of 2011. In it, Okon embodied a young trans man who tries to find his way in his new identity after undergoing a sex reassignment surgery.

For this role he was nominated for Best Young Actor at the German Actor Award in 2013; he was nominated in the same category at the Max Ophüls Preis Film Festival in the same year for his roles in the crime drama "Bissige Hunde" and the coming-of-age short film "Stufe Drei". The outsider comedy "Ein Geschenk der Götter" ("A Gift From the Gods", 2014), in which Okon was part of the ensemble in the role of a dyslexic, received much critical praise and several awards.

His embodiment of a young man with Asperger's syndrome in the television play "Ein Schnitzel für alle" earned him nominations for the Günter Strack Television Award and for the Award of the German Academy for Television in 2014. In 2015/16 he was seen in three episodes of the Canadian series "X Company" - for which he received a nomination for Best Actor in a Guest Role at the Canadian Screen Awards. Other important television work included the abuse drama "Operation Zucker: Jagdgesellschaft" (2016) and the mystery thriller "Wo kein Schatten fällt" ("Hanna's Homecoming", 2018). In addition, he had guest roles in various series and crime series.

In 2018, Rick Okon became the new investigator Jan Pawlak in the Dortmund "Tatort" episodes. In the same year, he appeared in front of the camera as a captain lieutenant in the German-American series "Das Boot" ("The Boat"). He also took on this leading role in the second season (2020).

On the big screen, Okon was seen in "Niemand ist bei den Kälbern" ("No One's With the Calves"), a mixture of coming-of-age film and East German provincial study about a young woman (Saskia Rosendahl) who wants to escape the confines of her barren home village. The film premiered at the Locarno Film Festival (Switzerland) in August 2021 and was released in German cinemas in January 2022.