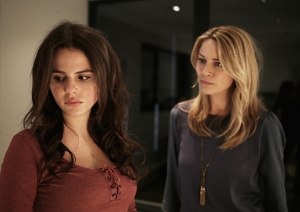 Petra van de Voort was born in Stockholm on April 21 1972. After being crowned "Miss Sweden" in 1995, she took part in the Miss Universe pageant, where she won the Miss Photogenic Award. Shortly afterwards, she was cast in a supporting role in the Swedish TV soap opera "Vänner och fiender" (1996-97).

From 2001 until 2005, van de Voort studied acting at the Stockholm drama school, and she has been working steadily ever since. After already appearing in numerous Swedish TV productions, of which many were co-produced by German TV networks, she started to appear in German-language productions as well. After supporting roles in the "Tatort" episode "Borowski und der coole Hund" (2011) and in "Zeugin der Toten" (2013), she was cast in the recurring role of the wife of psychiatrist and detective Joe Jessen (Ulrich Noethen) in the TV series "Neben der Spur".

On the big screen, Petra van der Voort, who lives in Hamburg and Stockholm, starred as the wife of a TV host who falls prey to an ambitious young woman and hides a dark secret of her own in the psychological drama "Zazy" (2016).