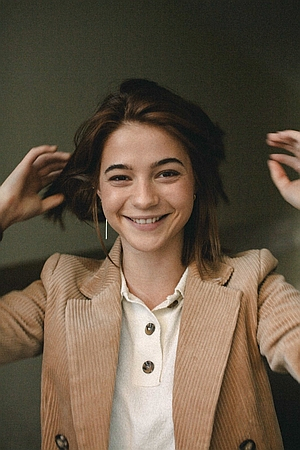 Lisa-Marie Koroll was born in Eisenach on December 26, 1997. In 2005, she was cast for the TV series "Familie Dr. Kleist", in which she plays the adoptive daughter of the titular physician. In 2013, she successfully auditioned for "Bibi & Tina", a screen adaptation of the eponymous audio drama series. Directed by Detlev Buck, the film was released in March 2014 and stars Lisa-Marie Koroll in the role of Tina, a passionate horsewoman and best friend of teen witch Bibi Blocksberg. Koroll returned as Tina in the two sequels "Bibi & Tina: Voll verhext! (2014) and "Bibi und Tina 3 - Mädchen gegen Jungs" (2016).

Completely different from her previous roles was her part in "Heilstätten" ("The Sanctuary"/ "The Haunted Hospital", 2017), a horror film about a group of young people who are decimated by an unknown person during a nocturnal outing. In the youth film "Misfit" (2019) she played a rebellious outsider, followed by a leading role in the school graduation comedy "Abikalypse" (2019).

Koroll received critical acclaim for her role as an anorexic 16-year-old in the TV drama "Aus Haut und Knochen" (2019), which premiered at the Hamburg Film Festival. With "Takeover - Voll Vertauscht" ("Takeover - The Swap", 2020), about the role reversal of two identical looking teenagers (Heiko and Roman Lochmann), Koroll returned to the terrain of the light teenage comedy.