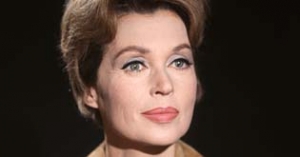 Lilli Palmer made her stage debut in 1932 at Rose Theater in Berlin. She then went to Landestheater Darmstadt where she mainly played in comedies and as a soubrette in operettas. In 1933, Palmer and her sister emigrated to Paris where they performed together as singing and dancing duo in cabaret shows. One year later, she moved to London to play the leading role in Irving Usher's "Crime Unlimited" (1935). At first, Palmer was mainly to be seen in supporting roles, for example as a maid in Alfred Hitchcock's espionage comedy "Secret Agent" (1936). She rose to stardom in Britain with Milton Rosmer's movie "The Great Barrier" (1937) but concentrated on her stage career between 1936 and 1945.

In 1943, Palmer married Rex Harrison and followed him to the USA in 1945 where she played alongside Gary Cooper in Fritz Lang's espionage thriller "Cloak and Dagger" (1946) and with Rex Harrison in Irving Reis' "The Fourposter" (1952), which was awarded at the 1953 Venice film festival. Palmer's first role in a German movie was the part of a ringmaster in Kurt Hoffmann's "Feuerwerk" (1954). She often played in so-called "problem films" and won national movie awards for her performances in Rolf Hansen's "Teufel in Seide" (Devil in Silk, 1955) and in Falk Harnack's "Anastasia, die letzte Zarentochter" ("Anastasia: The Czar's Last Daughter", 1956).

From the beginning of the 1970s on, Lilli Palmer starred in several TV productions. In 1974, she played the eponymous part in Egon Günther's adaptation of Thomas Mann's novel "Lotte in Weimar", a DEFA production that was aimed for the international market but did not succeed. In 1957, Lilli Palmer married Argentinean writer and actor Carlos Thompson.

Besides her acting career, Palmer was also a successful painter. In 1974, she published her autobiography "Dicke Lilli – gutes Kind", which was followed by its sequel "Der rote Rabe" in 1977. Palmer also wrote four novels and won the Filmband in Gold for her long-time, exceptional work in German cinema.