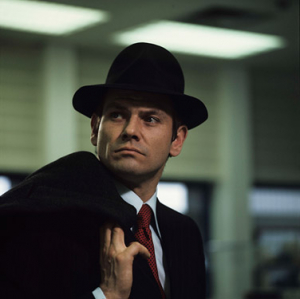 Klaus Löwitsch was born April 8, 1936, in Berlin and grew up in Vienna. He initially attended classical dance training at Vienna's Akademie für Musik und darstellende Kunst and subsequently went to the well-known Max-Reinhardt-Seminar to study acting. After his stage debut in the musical "Kiss Me, Kate" at Vienna's Volksoper in 1955, Löwitsch performed in leading roles on stage at various top-class theatres, for instance in Vienna, Cologne, Konstanz, Zürich, and in Munich from 1961 on.

Löwitsch made his movie debut already in 1956 in a small role in Gustav Ucicky's film "Der Jäger von Fall". That film started a 45-year long career during which Löwitsch starred in about 80 full-length feature films on the movie screen or on TV, as well as in more than 100 episodes of TV series such as "Hafendetektiv" (1987 to 1991) or "Peter Strohm" (1989 to1996).

Although he mainly played less prominent parts in TV productions during the 1960s, Löwitsch was seen in a number of top-class, artistically ambitious, and commercially successful movie and TV productions between the end of the 1960s and the early 1980s. He started with the drama "Mädchen mit Gewalt" ("Love by Rape", 1969), directed by Roger Fritz, that won Löwitsch the German film award. He then starred in numerous national and international productions and worked with well-known directors, including eight films with Rainer Werner Fassbinder, among them classic films like "Händler der vier Jahreszeiten" ("The Merchant of Four Seasons", 1972) and "Die Ehe der Maria Braun" ("The Marriage of Maria Braun", 1979). Löwitsch's most important works also include Reinhard Hauff's "Desaster" (1973), Daniel Schmid's "Schatten der Engel" ("Shadow of Angels", 1976), and Sam Peckinpah's war movie "Steiner – Das Eiserne Kreuz" ("Cross of Iron", 1977) and its sequel "Steiner 2" (1979).

With these films, Löwitsch drew interest from other international directors for his chiselled looks: Delbert Martin took him for a supporting part in the British GDR escape film "Night Crossing" (1981), and Clint Eastwood gave him the part of a Russian general in his Cold War thriller "Firefox" (1982).

From the mid-1980s on, Löwitsch more and more focused on his TV career. He starred in TV series such as "Tatort", "Detektivbüro Roth" (1986) and "Hafendetektiv", thus becoming more and more restricted to the image of the "tough guy" – an image that he successfully consolidated with the TV crime series "Peter Strohm". Löwitsch played the title role and also directed 63 episodes of the action series.

One year after the last episode of "Peter Strohm", Klaus Löwitsch starred alongside Matthias Habich in Oliver Hirschbiegel's crime film "Das Urteil" (1997), which won Löwitsch a Grimme award and a Bavarian TV award. He played his last role in the German-British co-production "Extreme Ops" (2002), an action film directed by Christian Duguay.

On December 3, 2002, Klaus Löwitsch died from cancer in Munich.