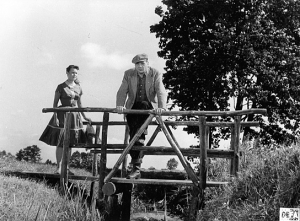 Johannes Arpe, born July 29, 1897, in Hamburg, graduated from drama school in his home town and made his stage debut at the age of 18 at Hamburg’s Thalia Theater. During his stage career he also performed at theatres in Flensburg, Bad Wildungen, and in Görlitz. Besides his stage performances, he also worked as a director at all times. In addition to his stage career, Arpe was also politically active. He, for instance, set up a group of "Kommunistischer Schutzverband deutscher Schauspieler" in Northern Germany.

After the end of World War II, Arpe took over the position of an impresario, at first in Chemnitz, and from 1951 on, in Leipzig where he was appointed general director of Leipzig’s theatres three years later. Arpe held office until 1958.

In 1953, Arpe made his movie debut in a supporting role in Martin Hellberg’s spy thriller "Geheimakte Solvey". During the following years, he appeared in several key and minor supporting roles, mainly as a person of authority, in numerous productions of DEFA and of DFF, including Eugen York’s film "Das Fräulein von Scuderi" (1955) and E.W. Fiedler’s film "Rivalen am Steuer" (1957).

After his retirement as the general director of Leipzig’s theatres in 1958, Arpe focused entirely on his movie career. He also directed two films for the movie screen: "Erich Kubak " (1959) and the drama "Der Fremde" (1961).