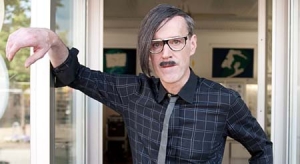 Jacques Palminger (neé: Heinrich Ebber) was born in Borken in 1968. He began his music career as a drummer for the Berlin-based band "The Waltons" and from 1992 till 1999, he was a member of the Hamburg-based post-punk outfit "Dackelblut". Subsequently, he worked as lyricist and musician for the band Universal González. Since the late 1990s, he and creative partners Rocko Schamoni and Heinz Strunk have worked together as the multimedia comedy ensemble "Studio Braun".
In 2007, Palminger released his first solo album, and until 2012, four more albums under different monikers were published.

In 1998, Palmiger made his feature film debut in Andreas Dorau's "Die Menschen sind kalt". He had supporting roles in Lars Jessen's TV production "Falsche Spur" and in Christian Görlitz' "Fleisch ist mein Gemüse" (2008), an adaptation of the best-selling novel by Heinz Strunk.

In 2009, his band "The Kings of Dubrock" worked with a group of adolescents on the stage production "Die Insel", which premiered at the Kampnagel theatre in Hamburg. In late 2010, he incepted the jazz and poetry project "Jacques Palminger & 440 Hz Trio" with Richard von der Schulenburg, Olve Strlov, and John Raphael Burgess.

He had his first major screen role in Lars Jessen's mockumentary "Fraktus" (2012): In the film, Palminger, Rocko Schamoni and Heinz Strunk play the members of a seminal electronic pop band, which is brought back together for a comeback.