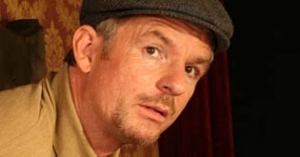 Heinz Strunk was born as Mathias Halfpape in Hamburg on May 17th 1962. Musically trained as a sax and flute player, he graduated from school in 1983. After first attempts as a composer, he joined the dance combo "Tiffanys" and subsequently toured the rural parts of Northern Germany for 12 years.

In 1993, Halfpape, who also played in Michy Reincke's band, first used the pseudonym Heinz Strunk for his self-produced album "Spaß mit Heinz" ("Fun with Heinz"). A guest appearance in a song by the popular band "Die Ärzte" followed, and Strunk continued to put out his own records of spoken-word performances and radio plays. At the end of the 1990s, he founded the anarchic comedy trio Studio Braun together with fellow Hamburg artists Jacques Palminger and Rocko Schamoni, and their recordings of phone pranks soon garner them a huge and enthusiastic following.

Apart from performing with Studio Braun, Strunk also hosted TV- and radio programmes and continued recording his solo works. In 2004, he published the autobiographical novel "Fleisch ist mein Gemüse", in which Strunk recounted his years on the road with the "Tiffanys". The book became an overwhelming success and to this day, over 250.000 copies were sold. A screen adaptation followed in 2008, and Strunk himself played the narrator in the film.

Without watering down his unique brand of humour for the mainstream, Heinz Strunk has established himself as an industrious and multi-talented artist. Aside from theatre work, records and a stint as the Hamburg candidate of the satirical party "Die Partei", Strunk also finished his second novel, "Die Zunge Europas", which was released in the autumn of 2008.

In 2012, he had his first major screen role alongside his Studio Braun partners Rocko Schamoni and Jacques Palminger: In the mockumentary "Fraktus", the three play a seminal, defunct electronic pop trio, which is brought back together by an ambitious producer.