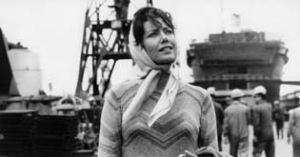 Scenes from a marriage in crisis. Karin Hendrich is 30, the mother of a young daughter. Before marrying, she was an interpreter. Her husband, Robert, doesn’t understand why she wants to go back to work. He’s a shipyard engineer and can provide for everything! Does he suspect that Karin is cheating on him with Ulrich, one of his freelance colleagues? Karin feels Ulrich is sympathetic to her desire for independence, but then he turns out to be "a man of his time" too …

"I just want out, out." "Kopfstand, Madam!" came down on the side of women like no other film of 1966. Animated by Betty Friedan’s feminist treatise "The Feminine Mystique", the film is a formally stringent update of Henrik Ibsen’s "A Doll’s House", with a middle-class household where, affluence and weekend home notwithstanding, the ‘joy of subjugation’ has lost its appeal. In 1967, Volker Baer said, "the scenes linger; there are long passages between each edit where the camera barely moves, which gives the entire thing a certain atmosphere. But what that particularly does is illustrate the outer calm and apathy, while making the inner disquiet and agitation that much more appreciable".