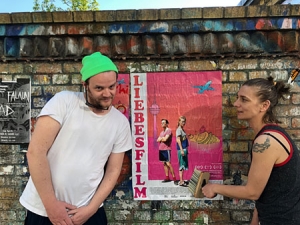 Emma Rosa Simon was born in 1977 in Tremblay les Gonesse, France. After finishing school, she went to the USA where she studied film and television for a year at the Academy of Art University in San Francisco. After completing a traineeship as a film and video editor and working with a camera rental company, she worked for several years as a lighting technician. In 2007 she began studying camera at the German Film and Television Academy Berlin (dffb).

In the following years, Simon worked as a camerawoman on numerous short documentary and fiction films. She made her debut as a feature film director with the documentary "Verlorener Horizont" (BO/DE 2013, co-directed by Robert Bohrer, camera and screenplay by Simon) about Bolivian conscripts training to become sailors. She then worked as a camerawoman on Bohrer's documentary "The Green Triangle" (US/DE 2014), about the history of the marijuana triumph in the USA. Her other works as a camerawoman include the documentary film "Trockenschwimmen" (2016), about a group of seniors who want to learn to swim, and TV documentaries such as "Mann/Frau" (2014) and "Paare" (2015), some of which were edited by Robert Bohrer.

Bohrer and Simon also realised their graduation film jointly: "Liebesfilm" ("Love Film", 2018, camera by Simon and written by both), about a dreamy thirty-year-old who is shocked when his girlfriend asks him if he would like to have children. The film premiered at the Munich Filmfest 2018 and was released in German cinemas in spring 2019.