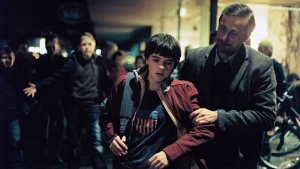 There’s a feeling going round Europe – and not only Europe. Something is not right about the place anymore. What if a rapidly increasing number of young people were simply to withdraw their consensus that the common sense view of the world is a market-based, economised one? What if they were to leave the older generations behind, disappearing into the distance, as in the legend of the Pied Piper, so that only when the wind is blowing from a certain direction, can the distant laughter of children be heard? From one day to the next fourteen-year-old Martha disappears without a trace. Her father, who for years has had no contact with her, embarks on a search for his daughter. He finds himself entering the poetic-speculative in-between world of missing children who are in no way victims, but voluntary deserters who have turned their backs on the firmly established world of adults.