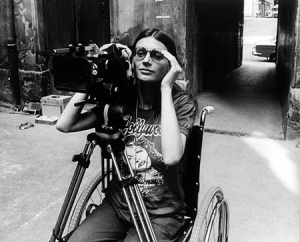 Claudia von Alemann was born in Seebach on March 23 1943. In 1964, she enrolled as a sociology and art history major in Berlin, before relocating to Ulm in 1965, where she studied film until 1968. Already as student, she completed her first experimental shorts and began to work freelance for several TV stations.

In May 1968, she joined the film collectives of "Etats généraux du cinéma" and made the TV documentary "Das ist nur der Anfang – der Kampf geht weiter" (1969). In 1973, von Alemann and Helke Sander became co-founders of the 1. Internationale Frauen-Filmfestival in West-Berlin- The following year, she moved to Paris, where she worked as a journalist, lecturer and filmmaker until 1980, and where she gave birth to her daughter in 1978. During these years, her feature films and documentaries often focused on political and film art, and the emancipation of women. In 1977, she became a teacher at the Hochschule für bildende Künste (HfbK) in Hamburg. In 1981, she published the non-fiction book "Das nächste Jahrhundert wird uns gehören. Frauen und Utopie in Frankreich 1830-1848" and premiered her feature film "Die Reise nach Lyon" (1980) at the Berlin IFF, where it eventually won the Film Critics Award.

Her satirical video experiment "Das Frauenzimmer" (1981), which she made for TV station ZDF, garnered accolades at the Festival Première Manifestation Internationale de L 'Audiovisuel in Montbéliard, and was later included in the collection of the New York Museum of Modern Art. She next helmed the 1982 feature film "Nebelland", which depicts the tragic love story between a German woman and an American man. The same year, she became a film professor at the Fachhochschule Dortmund, a position she held until 2006. In 1987, she premiered the feature "Das nächste Jahrhundert wird uns gehören" (1987), which won the Grand prize of the Jury at Festival Internationale de Films et Vidéos des Femmes in Montreal. Along with her university work, she continued to make short and mid-length essay films and documentaries, including "Nachdenken über Film" (1989), "War einst ein wilder Wassermann" (1996/2000) and "Short notes on a long shooting - the making of Madrigal" (2007), the latter documenting the production of the feature film "Madrigal" (CU 2007) directed by her husband Fernando Pérez. In addition to this, von Alemann was guest lecturer at several international academies and universities.

In 2011, she began production on the documentary "Die Frau mit der Kamera - Porträt der Fotografin Abisag Tüllmann", which portrays the life and work of her late close friend, the renowned photographer Abisag Tüllmann (1935-1996). The film was released theatrically in summer 2016.

Claudia von Alemann and her husband reside in Cologne, Berlin and Havanna.