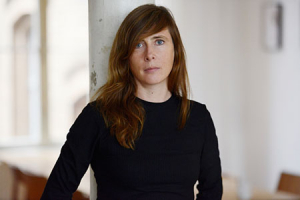 Carolina Hellsgård was born on the 14th of June 1977 in Stockholm, Sweden. From 1998 to 2002 she studied film studies in her hometown and subsequently moved to Berlin where she studied experimental media design at the Berlin University of the Arts. She graduated in 2007 as a master student of Hartmut Bitomsky. From 2008 to 2009 she had a DAAD scholarship at the California Institute of the Arts. Back in Europe she directed various short films, which partially ran through the festival circuit. The 14 minute short "Läufer" ("Runner", 2013), which was about a 13 year old drug dealer in Hannover, was nominated for the Preis der deutschen Filmkritik. From 2013 to 2014 she was offered a place with the Mejan Residents Program, which was an artistic research project that lasted one academic year at the Royal Institute of Art in Stockholm.

Carolina Hellsgård made her feature debut with "Wanja", which was realeased in 2015 and was about a former bankrobber (Anne Ratte-Polle) being released from prison and through motherly instinct befriends a 16 year old problem child. "Wanja" premiered at the Berlinale as part of the Perspektive Deutsches Kino Section. Subsequent festival participation followed. "Wanja" won the prize for best debut film at the Biberacher Filmfestspiele. Hellsgård was also awarded with best Screenplay at the Valletta Filmfestival.

From 2015 to 2017 Hellsgård was a screenwriting and directing lecturer at the Braunschweig University of Art as part of the Dorothea Erxleben Programme. For the first quarter of 2017 she held a fellowship at the Villa Aurora in Los Angeles. In the summer of the same year, she started shooting her second feature film, that would premiere at the Toronto Film Festival in the next year: "Endzeit" ("Ever After", 2018), a feminist zombie film, that takes place in Germany. After several festival participation, including the Filmfestival Max Ophüls Preis and the film festivals in Gérardmer (France) and Gothenburg (Sweden) "Endzeit" was released in german cinemas in the summer of 2019.

In the same year Hellsgård shot her third feature film "Sunburned", which is about a girl (Zita Gaier) that wants to help a Senegalese beach vendor. The film was released in summer 2020.