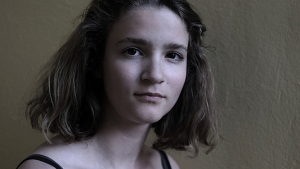 Zita Gaier was born on January 24, 2006 in Austria. Her older brothers Enzo Gaier (*2002) and Lino Gaier are also actors. Already as a child she learned to play the piano, sang in a choir of the Vienna Music School and danced ballet and modern dance.

She got her first acting role in the movie "Maikäfer flieg" ("Fly Away Home", AT 2016), in which she played the lead character. Her brother Lino has a supporting role in the film, which premiered in March 2016 at the Diagnole in Graz. In autumn 2016 Gaier began, while still in high school, the University preparation dance course at the Vienna Conservatory.

In 2017 Zita Gaier played a supporting role in the Austrian television series "Trakehnerblut". In the TV movie "Die Professorin - Tatort Ölfeld" (AT 2018) with Christiane Hörbiger she impersonated the main character at a young age. In summer 2019 she stood in front of the camera for the low-budget production "Ground Control" by Helmut Karner. In the same year she appeared in the fourth season of the series "Vorstadtweiber" as the daughter of a main character.

Geier's second feature film was "Sunburned" (2019), directed by Carolina Hellsgård. In it she had the leading role of a 13-year-old girl who wants to help a young African beach vendor during a holiday in Spain to get the money he needs in order to be able to visit his father.