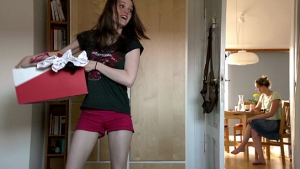 Unannounced, Aziza is once again standing in her room – internship, Portugal, everything canceled. But her room is occupied. Her mother, Trixi, has rented it out. Zach lives there now, a twenty-something from New Zealand, who came to Germany on a one-way ticket. Starting from this situation, the film develops an almost documentary-style portrait of a Kreuzberg ‘situation’: everything is readily available, time, people, summer, streets. And in the end a crash, the film itself: ‘for nothing’?

Clustering together in a neighborhood, sitting on the street doing nothing or very little, does this have a method? Is there something ‘meant’ by the Kreuzkölln situation of sitting-in-the-sun, using the streets like a bar, and singing on the streets - even if no one is even trying to ‘mean’ or ‘say’ anything? And yet: this use of the city, persisting on getting by without money, insisting on having time, this ‘demonstrates’ something. And what if it were just a way of reacting to the word ‘crisis’? To film the condition and to capture a story in it. People that live here, others that have joined them, stay for an undetermined time, leave, interrupt, also just to end this story altogether. (Stephan Geene)