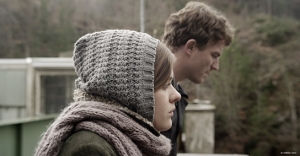 Nothing really seems to interest Roman, who spends his time at parties, with his sort-of girlfriend and video games. On the side, he works part-time for a lawyer, transferring texts and documents into audio files so his boss can listen to them while driving in his car. When he is asked to work on the files concerning a gun rampage, even nihilistic Roman is shocked by the details of the crime: One year earlier, a high school student from a small mountain village shot numerous of his classmates and teachers before killing himself – all of which is documented on hundreds of pages. But some files are missing, therefore Roman has to travel to the village in order to retrieve them from the local police. Once there, he makes the acquaintance of Laura, a surviving student and witness of the crime. She opens up to Roman, shows him the school and tells him everything about the fateful event. Slowly, Roman begins to grasp the real dimensions of the tragedy.