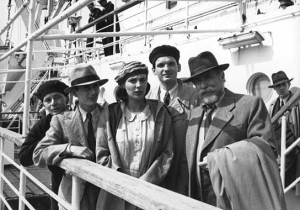 Following on from "An uns glaubt Gott nicht mehr", the second part of Axel Corti's and Georg Stefan Troller's Holocaust trilogy describes the experiences of hopeful exiles who fled Europe during the 1930s and 40s. In the "new world" of America, they are confronted with homesickness, shattered illusions and the lingering horror of the past war years. The protagonist Alfred "Freddy" Wolf was on the same emigrant ship to America as Ferry Tobler, the hero of the first film. In the USA he meets Popper, a photographer, the depressive Lissa and the mute Mrs. Marmorek. Together they want to travel on to Santa Fe, but even with this new departure, the memories of what they have experienced and the new fears cannot be shaken off - a real arrival in the USA fails. When America enters World War II, Freddy volunteers for the army and is transferred to Europe, turning him from a former refugee into a homecomer.

Sequel: "Welcome in Vienna", which is also the end of the trilogy.