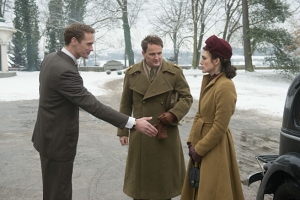 Hamburg, winter 1946: The British Rachel arrives in the city which has been badly destroyed during the war and where her husband Lewis, a British lieutenant colonel, is now responsible to push ahead with the reconstruction and supervise the denazification. To Rachel's surprise, however, she does not get to move in an apartment with her husband, but the two reside in a confiscated manorial estate where the previous German owners still live, namely the widower Stefan and his traumatised daughter Freda. Lewis allows the Germans to stay, but the coexistence of the two parties, suspicious and hostile towards each other, creates a tense atmosphere. As Rachel feels more and more attracted to Stefan, dramatic events are set in motion.