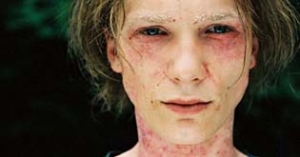 Skin as a mirror of the soul: Since his earliest childhood 17-year-old Guido
suffers from neurodermatitis. After being hospitalized on account of a particularly
severe attack, he is persuaded to go into holistic therapy, which
teaches that the origin of the disease can be found in the emotional state
of the patient. Guido gradually begins to scrutinize his immediate surroundings
and discovers that his supposedly intact family is built on a lie.
When he catches his father having an affair and learns that for years his
mother has tacitly accepted this humiliation and drowned it in alcohol, he suddenly realizes that during his entire childhood he has acted as a surrogate
for the psychological pain of his mother. He takes refuge in the flat of
his older brother, where he meets the charismatic and mysterious jack-ofall-
trades Rudi, who teaches him to be more egotistical. Guido finally
understands that his condition can only improve if he begins to help deal
with the situation of his mixed-up family.

Ingo Haeb, previously known as an actor and screenwriter, has used motifs from his own past in his first feature film, which he directed with Jan- Christoph Glaser. "For me neurodermatitis is the physical expression of a lack in the ability to draw a clear line to others and as such is a symptom of the humanistically-orientated Western world," says Ingo Haeb.