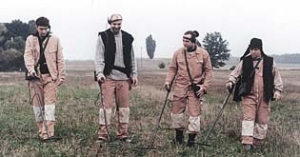 The "Dog Heads" are four old army friends whose job it is to search farmland for buried mines and munitions. They use their detectors to locate and then uncover not just the tools of death and injury but also their own past. Sylvia is worried about her husband, Christoph, who has taken a dangerous job.

He hasn′t seen his old pals in years, not since their time together as border guards. Now he wants to go mine-hunting with them. Stefan, Konrad and Mirko are ready to go. But the Dog Heads are not complete - Alexander is missing. Once the love of Sylvia′s life, he drowned trying to swim the Elbe River from East Germany to the West. But the mysterious circumstances surrounding Alexander′s death have never really been clarified, nor forgotten. Suspicious of the friends′ reunion, Sylvia investigates the past and stumbles upon contradictions indicat-ing that perhaps Alexander′s death was no accident at all...