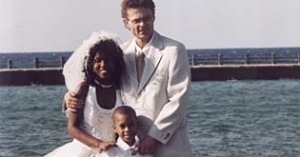 During his holidays in Havana, Erik meets a Cuban woman named Gladis. "It was love at first sight," he says.

A year later, Gladis and her 8-year-old son board a plane, full of hope, but also with tears in their eyes, to leave the island.

After their arrival in Hamburg, the three follow a path full of comical, sometimes painful, and surprising events. But the twists and turns of this path tell the story of arrival, departure, the battle of the sexes, and the confrontation of cultures.