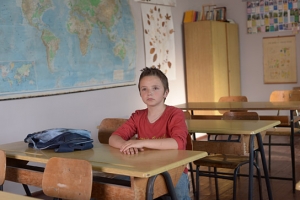 Ten years after the war in Kosovo and unfolding through the eyes of a lonely lad, this is a poignant and intense coming-of-age story that shows young boys in their struggle to follow the blood feuds of their parents and questions whether co-existence is possible between two communities.

In a small Serbian enclave lives 10-year-old Nenad together with his father and his sick grandfather. Besides them, an Orthodox priest and a 30-year-old teacher are the only Serbs around. Every day, Nenad is driven by a claustrophobic KFOR military vehicle from his father’s farm to school, where he is now the only student. His great desire to play with other children seems unattainable. Again and again, he sees two boys his age through the slots of the armored vehicle and the 13-year-old Albanian shepherd boy Bashkim, who lost his father in the war and hates the Serbs.