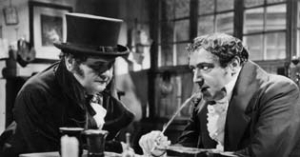 Anti-Semitic and anti-British propaganda film about the rise of the Jewish bankers (the Rothschild family) at the beginning of the 19th century. The film portrays the family′s greatest coup as the fabricated report of a possible British defeat by Napoleon at Waterloo. Through the inexpensive acquisition of English stocks thereafter, the Rothschilds gain substantial capital. The closing scene depicts a burning Star of David superimposed on a British flag.