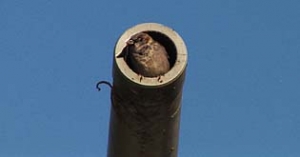 Day of the Sparrow

"Day of the Sparrow" is a political nature film. It is about a land in which the borderline between war and peace disappears. On 14 November 2005 a sparrow is shot in Leeuwarden, Netherlands; in Kabul a German soldier dies in a suicide attack. The juxtaposition of the headlines provides director Philip Scheffner with the occasion to set out in search of the war with the methods of ornithology. In Germany, not in Afghanistan.

His journey through Germany begins at the Baltic Sea, with childhood memories of a bird sanctuary between a military training area and a sailboat marina. From place to place the camera circles around the reality of war, in images of seeming peace. Dialogues from accidental encounters float through the deserted countryside. The birds remain constantly in the focus of the camera. They sit in cannon barrels, on fences, flatter about over meadows and fields, mark the places where this war is carried out. And suddenly the perspective shifts. A friend of the filmmaker is arrested on a country road in Brandenburg. The bird watchers themselves are now the object of observation.

What remains is an unusual view of a familiar scene: a military training area between a bird sanctuary and a sailboat marina. Hurtling missiles whip up the turquoise-coloured water, above which the birds continue their flight unheeded.

Philip Scheffner: "With 'Day of the Sparrow' I want to create a cinematic space between image and sound, between analysis and imagination, that puts into question the seeming matter-of-factness of the current war."